"I couldn't quote you no Dickens, Shelley, or Keats..." 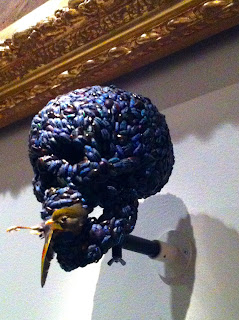 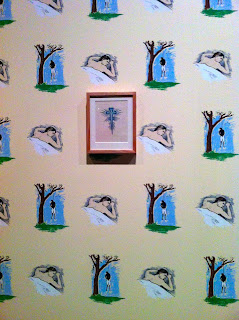 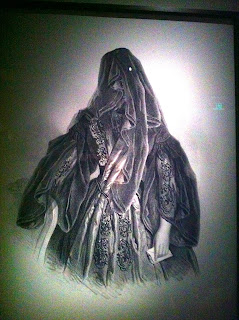 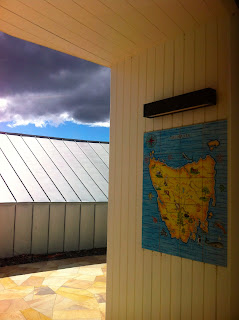 The MONA museum: http://www.mona.net.au/
is a tourist site that I never get tired of going too.  I love that Hobart has a museum that is a tourist site because it is unexpected.  The museum changes often enough to be interesting for me every time.
I find happiness in the fact that Hobart is attracting more of the type that will understand and appreciate a museum like MONA but also that there is still a large share of the type that find MONA disturbing.

I enjoy peoples reactions to their visit.  I love that I get to go whenever I want and experience of all the changes.
As my friend Kat planned her visit during MOFO: http://www.mofo.net.au/ (she wanted to see Amanda Palmer who cancelled)- so the museum grounds were as crowded as I had ever seen them.  There was a strange mix of random cruise ship people- loudly announcing their ignorance of where they were or why and then many I assumed were comped festival artists, and personnel.  I would normally have not gone during a time I knew would be crowded, so I am glad I got to see such a mix of visitors.

We had biked (there had been rain showers off and on all morning so skating was too risky) to the museum from the domain.  The wait for the museum was about forty minutes but at least the exhibits were not unbearable crowded as the capacity was capped.  There is now a movie theater that will be running the Operas (finally!) from New York- which for the last two years has been making me feel very left out of the world...not being in a city where I could go and see the Opera feed.
http://www.metoperafamily.org/metopera/liveinhd/LiveinHD.aspx
http://www.sharmillfilms.com.au/?page_id=2195


I am going to catch up a bit as we are in between visitors again for another week.

Email ThisBlogThis!Share to TwitterShare to FacebookShare to Pinterest
Labels: Morilla, Museum of the old and new, Opera, tasmania

"There's no hurry, we have all the day before us!" 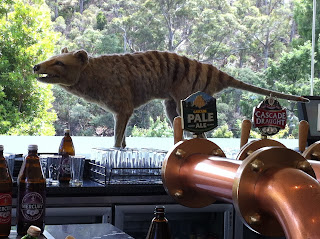 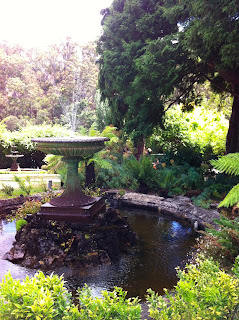 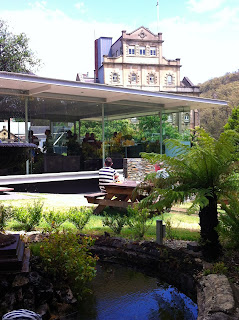 I love to be a tourist is my home town.
This is a convenient way to live as I have called many towns home.
The Crowleys' came to stay for awhile, and mostly we ate and went to the beach and entertained very small people, although only two, did seem to outnumber us.
However, there was one of two tourist items on the list that we could do and that was take a tour of the 'Cascade Brewery'.
Being Tasmania, this would of course be the "longest, continually run brewery in Australia".
I was a bit unsure about taking a group tour but I really did learn a lot.
I could have guessed the origin story- some man in the area of England, heard of the opportunities in the new land and decided to come over and build a water powered saw mill to cash in on the booming building trade. (The brewery part is the more interesting part of the story).
After a false start or two, he made it over, met with the Governor-General and was allotted his 20,000 hectares and 2,000 convict laborers. (okay maybe that was 2,000 or 200 I never can remember anything past the whole "free" land and labor part).
He got the spot he wanted which was below the meeting of two rivulets coming off Mt.Wellington- this is where the name Cascade comes from.
However from the aforementioned false start- some "coppers" came by and put him in jail for two years.  While he served his time, construction continued on his factory but while in jail he came up with the idea to start the brewery instead.  As he owned the only pure water source, all beer in Hobart was made in town with water that ran down past the prisons, the slaughterhouses and other pleasant areas.
Here is the cliff note version of my other fun facts.
The Tasmanian tiger at the bar is actually fake, and was made by an agency for a commercial that everyone except me remembered.
The face of the tiger is not representative of the real animal as it was made to look "friendly".
The brewery was not passed down through the family because the boys did not have children, and the four daughters with the nine grandchildren all "perished" in a boat just off the coast of Wales on their way back to England for a wedding. (!)
Until 1994, there were four times a day a bell in the brewery rang: "Tea, second Tea, after-tea, and dinner", in which all employees and crafty truck drivers with good timing, were given ten minutes to drink all the beer they could in that time.
Apparently very few people every quit their job at the brewery.
Now- the new policy is that each employee gets a case fort-nightly to drink "responsibly" at home.
I also learned that vegemite is made from the sludge at the bottom or was it skimmed off the top? of the beer vats.
I am not sure if this makes me feel better or worse about vegemite.  However its iconic status makes more sense to me now.
I also learned a new word from the ingredient list- wort.
I plan to use it in scrabble as soon as I have the chance.
Posted by Colleen at 6:45 PM No comments:

...and the whole world was standing still and the moon was turning red..." 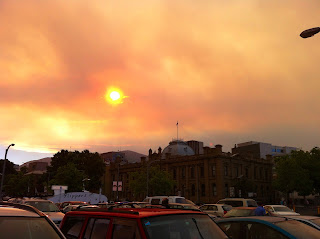 The fact that upon returning home to Tasmania, the island experienced the hottest day ever recorded- 41.3 c., should teach me to not joke about the difference between Stockholm and Hobart.  Yes, the season are reversed, but normally we do not go from one of the coldest winters to one of the hottest summers- however this year that was the truth.
The day that was 30 c. plus we took to the beach with its cool waters.
For this 41.3 c. we went to the movies which is one of the only air conditioned places I know of.  I felt the guilt of not being in the fire zone.  Of course any fire can reach even where we live- and in 1967 the fires were above even the central business district of town.  This is one of the reasons people do not take containment of a fire for granted.  I am not a native- so I do not have inherent worries about fires.  I understand, because as a Californian I do have that inherent panic from my experiences in earthquakes.  In fact, it is that sense of unease that I feel when the world goes still, and the hot air is oppressive and one can feel the threat, only here that threat is fire not earthquake.
I have learned that the land here- not only recovers from fire, most of the land is reinvigorated by it.  These are gum trees not oaks or redwoods.  I also learned that 'my' fire plan - "walk into the bay"- is an actual plan.  I was joking but apparently...
Basically- people have to either leave as soon as the threat begins or is anticipated or they need to stay and know how to defend their house.
This is harder if you are surrounded by acres and acres of bush- as opposed to us, being surrounded by other houses.  Houses which here are commonly brick not wood construction. 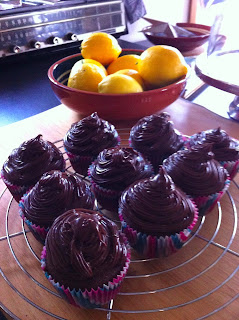 Meanwhile, as you can see by these tasty and pretty cupcakes, Zok is happy.  The first thing I did when I got home was to put on a record, and then I picked some lemons so I could make lemonade. 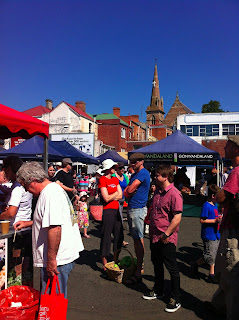 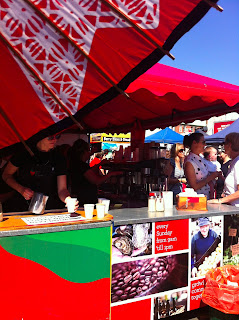 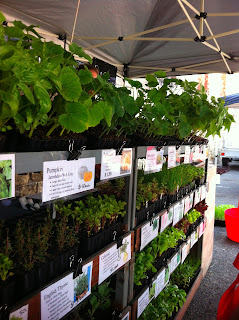 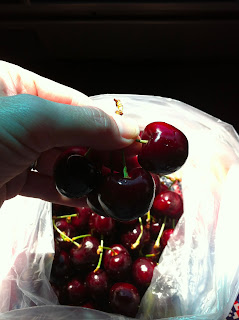 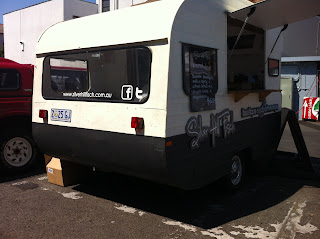 The farmers market, Sundays- in town continues to grow.  I bought two nice bottles of wine for my Finnish by way of Sweden- currently living in Sydney guest who arrive late next week.  We also bought; cherries, bosenberries, blueberries, gooseberries, and late season seedlings for the garden.  I had an iced-coffee (!), and a man next to me said 'Ah that looks like a spider.' and I was so happy to explain the difference between the two.  For my first six years in Australia all I ever got was someone explaining a 'spider' to me when explaining why I couldn't simply have iced-coffee.
Also note the cute food trailer- an idea that years ago everyone I know told me would never work in Tazzy.
Posted by Colleen at 10:13 AM No comments: