The final month at home- so we are trying to arrange the garden for winter.

Zok pulled out the last of the rhubarb and covered his vegetable beds with weed matting.

We did the same for a different purpose in the back corner where I have never yet been able to control the onion weed.  For the most part I let the weeds alone.  I don't want to use poisons to control them so I dig out the ones that are really strong like Dandelions.  I let some just die back and return.  Some days I just feel like weeding and I sift them out.
The problem is that to put weeds in your compost it has to be really hot.  So winter isn't a good time as we aren't here to keep the compost properly layered.
During the summer I take the weeds which have light not deep roots and put them in when I put in grass clippings as that always heats up the pile with its nitrogen release.
You can also bag them up and leave them in the sun which kills them off, and that is mostly what I do but then I still take them to the tip compost which is much, much larger than ours.
Mostly Zok and I are just hanging out because he leaves for work soon, and then we go to Sweden- rinse, repeat.

I made some BBQ sauce from the last of the Rhubarb.
Zok was pretty amazed that it tasted and smelled like BBQ sauce.
I had my first disaster- a jar breaking during the final boiling process.  ! 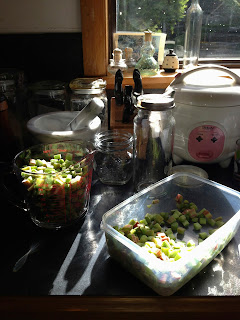 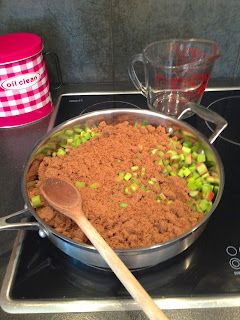 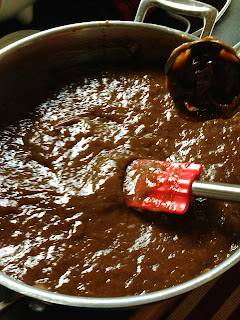 I used an American recipe- normally I would have cut down on the sugar, but I like my BBQ sauce sweet and I sort of needed to use up the brown sugar as we are leaving and it will be one less item to put into a storage container. 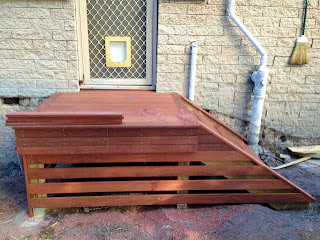 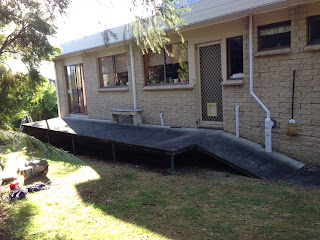 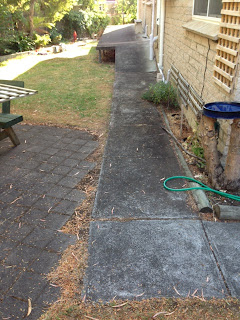 I am back to normal after my first hospital/surgery adventure.
Already the experience is dimming and fading.  A lot of anxiety for the easy outcome.
Not having energy, and looking foreign to myself in the mirror was not pleasant though.
I am glad to be better.

I remembered that I never updated our new deck here for anyone who might be interested.
So that is my purpose.

Autumn came on so quickly, one day I needed rain boots not a swim suit.
A few days later, rain gear and jackets came forward and summer items moved to the back.
I keep thinking I need to go to the beach, but some gardening task or task to get ready for a return to Sweden gets in the way.
I will make the time - but not until Zok leaves for his tour in S. America.

Here is the new porch.  A lot needs to be done to fix the paths and set up the BBQ and eating area again, however I see clearly that will happen when we return and not before.  I don't think you can really see that all the paths were taken out.  Zok wants lawn put in.  There is now space between the two porches and what happens there is still a hot topic of debate in the Combs vs. Malceski household.  (Although our neighbor Sue agrees with me and that is always helpful.)  I think that when we actually have a BBQ- the experience will dictate how the yard is put in order.  I think though, there will always be a consensus that the cement porch was just plain ugly.

I have a list of sprucing projects for our return.
These used to seem never ending but now that I go and spend time in an apartment that doesn't need me at all- the spruce list just makes me feel 'wanted'. 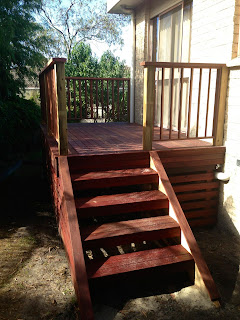 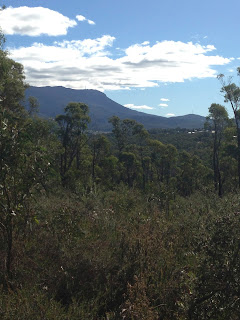 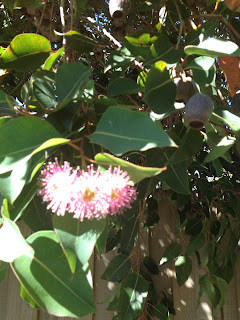 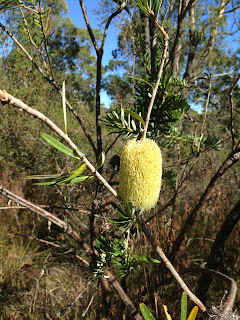 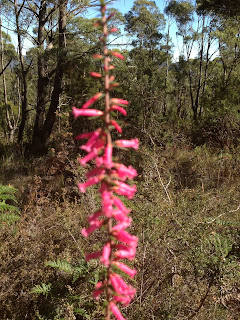 Posted by Colleen at 4:55 PM No comments:

Side by Side and These Amazing Shadows

I am not sure how I decided to watch these two documentaries about film in the same week, but I am happy that I did.
Happy, because 'Side by Side' distressed me almost to depression but 'These Amazing Shadows' brought me back hope.

I use the word depression with a serious and true meaning-
Because when I think of film- and along with film, music- so much of my darkest times have been lightened by both of these mediums.
Music without question- but film- film can pull me from the depths whereas music is more necessary like water.  Film is coffee, film is a perfect cocktail, I could live without it- but I don't want too.

I find it a bit odd caring about subjects that so few others seem to care about.
I couldn't get a reaction from any person when I was harping on about movie theatres replacing their projectors with digital.  I felt so old thinking of
'Cinema Paradiso' juxtaposed against people watching films on their phones.

I couldn't express why the loss of video stores was so alarming when I was clearly presented with the immediacy of digital film; in torrents, in streaming, in 'on demand' formats.  But I was, and I still am- distressed.  Losing video stores especially great ones like Scarecrow in Seattle or Rocket Video in L.A. for me was akin to losing library access.  I did not need to own films, to clutter the world with my personal debris, because I could always go to the store and film a film to borrow.   But then I moved to Bellingham and started using Netflix- at least I was getting actual dvds.  But then I moved to Australia, and the video stores were the worst- but they had a version of Netflix, but it wasn't very good either it was just better than nothing.  Then came torrents and a devil may care attitude to picking up dvds as often as I could.  I have a huge wishlist of missing films, and I can almost not deny any film I like at all if it is under $5 in price.  Every new apocalyptic portrayal of the future spurs me on (until of course I realize that power will be a problem...running a projector via a bike sure...the dvd player or computer? not so much...).

But why should I care- with these intangible formats?  That should be better no solid item to take up space.  Only of course digital does take up space but I shan't go on here about servers or cables on the ocean floor.  'Side by Side' showed me that there is actual NO preservation of digital.  Many directors and studio people mentioned having a 'back up' but no way left to view that 'back up'.  People mentioned the 'irony' of the fact that creating a copy onto film is the best means of storing a copy of even the most modern film (think Avatar). On the other side of this was film advocates saying (and I am paraphrasing) "Well at least with film all you need is light." Which is true, of course film has all its complications especially the flammable format.  The commonality of 'Side by Side' and 'These Amazing Shadows' is regardless of format- for the most part a film is forgotten after its monetary "product" aspect has waned.
This is why I was so pleased to realize the U.S.  government repairs, saves, and keeps safe copies of film through the library of congress.  Not just first run films but also commercials, music videos, home videos documenting the time and life of its period.  I love old films for this reason- films that were "modern" especially like 'Marty' or films by Truffaut- where the set dressings are as they really were for the time period, not the stylization of a film like Argo.  Not that I do not like a period film, I just think so much was captured that was normal in its time but lost to our time.

"there are young dreams crowding out old realities"

I went to the MONA cinema not to see an Opera as originally planned but to see a live performance of the Bolshoi 'La Bayadere'.  This is a classic ballet from 1877 although it has been revised since then, but apparently rarely done in its entirety outside of Russia.
I haven't seen as many classical ballets as I have modern- at the time I was going regularly to see the Goffery Ballet perform- I picked modern ballets.
This ballet had all the elements I liked plus a bit of voyeurism- as during the breaks the cameras were focused backstage or in  the foyer.  There was a different feeling to say watching some live event on television. I did not have the thrill of dressing up and going downtown to a big event but I think moving these events from a cinema to a television feed somehow would corrode the experience. Yes, my event started at 11am, and I was not dressed up- and other audience members were drinking and eating, yet still- I had to travel and I was focused for the whole event.
Our hostess was quite the over achiever speaking three languages at the minimum, French, Russian and English. As well as translating for her interviewees on the spot.
The ticket price was $25.  I paid $100 a ticket to see The Bolshoi live in Seattle some time in the 1990s. Gold Class (from the large Australian chain) which as a venue is similar to MONAs (MONAs is better) is $35 for a first run movie release.  So $25, seemed down right cheap.  I am feeling spoiled, No I am now spoiled with MONAs existence. Hobart would be sadly lacking without it. 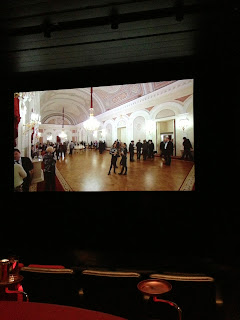 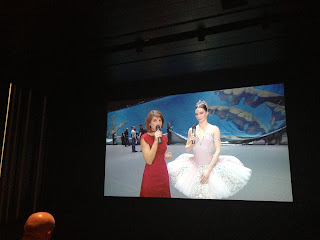 Construction update-
I did not think that more construction was needed on the house until the bricklayers (Brickies-in Australian speak) pointed out to me that the lines of the bricks were all sloping towards the center instead of being straight.  Zok (who truly is not good at estimating  the cost of things) really noticed that fact when the concrete porch was removed.  Also his estimation of the new porch costs were so high that all-in-all he came in close to his budget.
I on the other hand feel itchy- and a bit worried about over capitolization.
The construction is not done- and I fear odd bits of wood planking,bricks, and odd ends are all being left behind. I have cleaned up the bits of trash and tea bags tossed into my garden (!).
But the railing is still to come and the lawn and many plants will need time and attention to recover.  Some things have been put back in the wrong place and some things have not been put back at all.
Sigh. 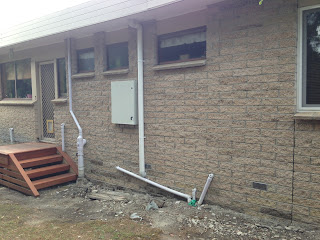 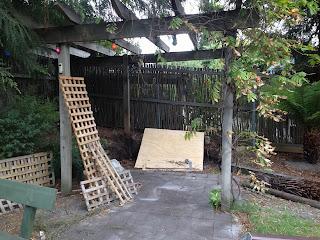 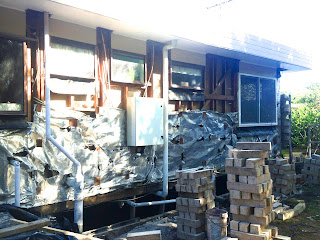 Posted by Colleen at 7:35 PM No comments: