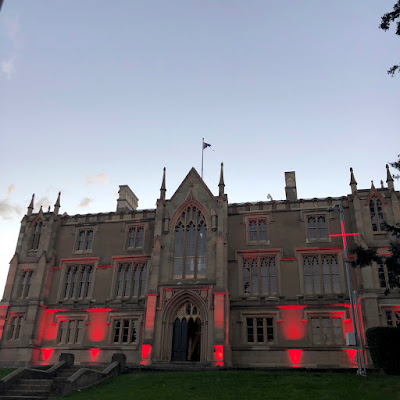 One of my choices (motivation in part by time of day and price)- was what I thought was an art installation by Laurie Anderson- inside a building I have never been too, and had missed being in town for the chance during an 'open city' event.
I was wrong both about which building the installation was in and about what I thought the installation was.  We went to 'Chalk Room' at Domain House.
Domain House, I read was were the original Hobart University was housed, and that the University regained ownership in 2011, and had since refurbished the building.  This was not how the building looked to me- I thought this was another one of the many unused buildings that MONA seems to get access too.
The art installation was a virtual reality installation.  This was my first time trying V.R. and I thought it was a lot of fun.  There was a flying section, - of which there was a sort of night cityscape- for me the sensation was a bit like being inside a movie from the modern first person point of view that a lot of Sci-fi films use.  I loved the experience so much I convinced more people to go with us the second time.

In the same building was 'Lou Reed Drones'- which apparently was Lou Reed's guitars and amps set up to feedback, in a continual droning manner.
I thought this was sweet, even though Laurie has lost him- physically, there art can be co-existing in the same space.
I also thought that the location was just off the through way far enough that we got easy parking, yet could walk down to Dark Park.
Dark Park was really crowded both times we went- which was of course both really good, and a bit of a hassle. 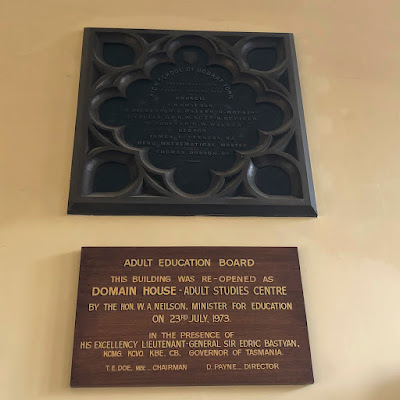 Posted by Colleen at 3:13 PM No comments:

Blogging out of order - S. comes for Dark MOFO Week 1 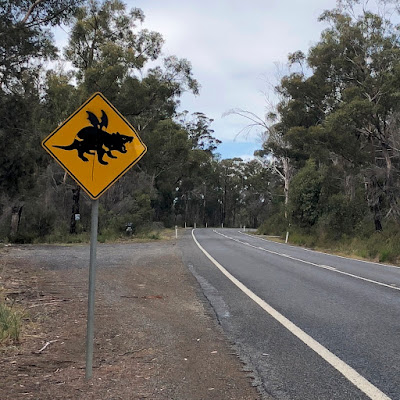 My friend S. adjusted her festival plans to include me after we realized I would actually be home this year during June. We drove down to Port Arthur for the first Dark MOFO event 'Quartet for the end of time' performed in one of the penitentiary buildings.  We slept over nearby the tessellated plates to see if we could luck into a 'social media' worthy photography opportunities at sunrise and sunset.
We didn't have much luck with that, and I proved to myself that my body still is resistant to that side of morning. I was ruined for any plans in the evening that didn't consist of being near my couch.  My guest was moving into town for late night adventures, so our rest rest worked out okay for her.
Thankfully she had only added this on to her plans that had been booked months ago, so she had better opportunities to come.  Hobart is definitely so popular that booking months ahead is now the norm.  When I found out I'd be here in July I tried to find accommodation near Cradle Mountain so I could see the park covered in snow, but everything is booked out.

I did pull the Jeep over to photograph the road sign posted here- Something I have wanted to do for years now.

The Quartet piece was quite jazzy- which was unexpected but the performance was only an hour- and the setting was interesting.
I realized that I don't know as much about tides as I thought, and low tide in the 'Remarkable Cave' was still too high to access the caves- 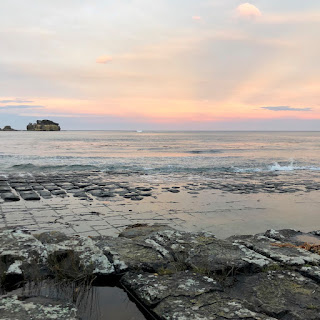 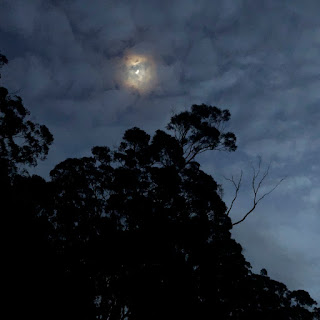 Winter moon outshining the winter sun during its rise 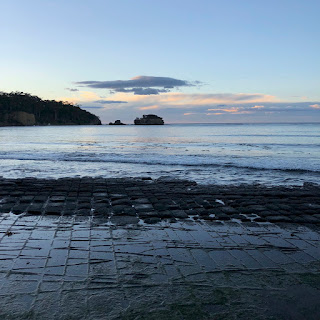 "I am slowing down as the years go by" 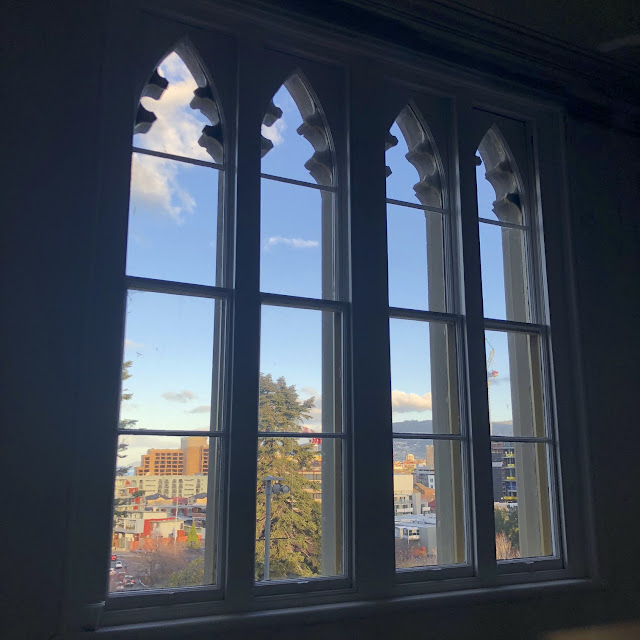 ...and then next week comes the start of July.

The three week visit of my most frequent visitor has come to an end.  We have our departure date for Sweden as well.  For the first time we are going on a one-way ticket because we really do not know what will happen.  I felt like a bit of a jinx during the festival as our attempts at capturing photos in the prime social media times of Sunrise and Sunset, low tide, or catching a natural phenomena did not go well when we were together.  She did better after she relocated into town.

The festival continues to grow larger.  My favourite part remains the fact that they use buildings that are not in full time use- or sometimes not in use at all anymore.  I am always curious to see into buildings and learn about the history of the place I am living.  A habit perhaps formed of not being from a place and having lived in so many different places.
Seattle has been in my thoughts often, because I notice changes here, that to me are the same type of indicators I saw when Seattle was "suddenly" discovered by more and more people in the the early to mid-1990s-
I hadn't lived in Seattle long enough to feel I could rail against the growth like the locals and I still sort of feel the same way here- for although Tasmania does comprise basically all that I know as Australia...I am still a new comer.

Now, I am beginning our last month before we leave for an undetermined amount of time, I seem always to use our comings and goings as markers of what I have not achieved.  An attitude I am working to adjust- my analytic - judgemental self is boring me.  So far, I am not feeling the impact of my trying to make changes. 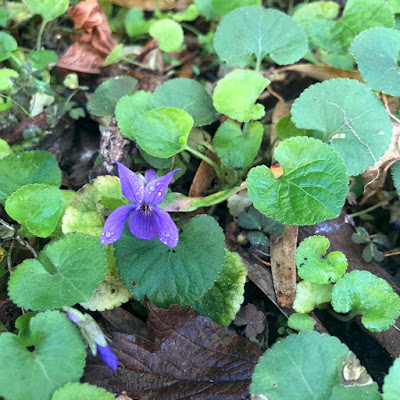 I realized that this blog had not crossed my mind, since the last time I had a visitor. So another month has passed and now I have a friend arriving tomorrow- MONA has extended the dates of Dark MOFO, their winter festival, and we have extended our time to include most of winter here.  Well, a good solid month of winter.  I have bee enjoying the shorter days, with the sun setting at 4:40, the construction hours have lessened and I can miss most if not all of the noise.  Of course, the construction is the lure that is keeping us here into winter.
Everyone is sleeping more, as if our bodies are making up for our 26 months without winter.
I have a strange bit of superstitious thinking, that perhaps illustrates that I take random events a bit personally.  I had written up a post here, and then the server crashed, and the post was actual lost, even though there should be the auto save.  I was going to take this as a sign to not bother to re-write.  However, my whole intention was just to put up a stop-gap to remind myself that my life does continue even when I don't feel there is anything worthy of a diary entry.  Mostly this is because of our new phone plans that allow us to call long distance for no additional charges which means I have been if not actually speaking to friends, at least leaving them messages.  Originally I started this blog because at the time there was no easy way to keep up with friends unless I did a mass email, which could cost a bit of money if we were traveling, or even on some of the plans that we have had.
But I do not think anyone keeps up with these posts, but I have become a bit dependent of using them as a visual calendar.
I have been trying to use winter and the quiet to work on myself.  I was a bit dependent on self-help books when I was young.  For years I haven't felt a need for them, but as 50s are here- I feel a need to check in with myself.
There is so much in my life I am grateful for- but I also do not want to become complacent to the point of ...well I guess to a point of ingratitude.
Tomorrow my friend and I are staying over down in Port Arthur, going to see a quartet play 'Quartet for the end of time' or as my favourite snob would say 'Quatour pour la fin du temps' as the composer is french Olivier Messiaen, the piece that he composed while a prisoner of war during WWII.  Hence, perhaps the on the nose location of Port Arthur a former convict prison.
We have aspirations that involve low tide, a sea cave, and a sunrise.
With success I will post photographic evidence.

Posted by Colleen at 6:32 PM No comments: