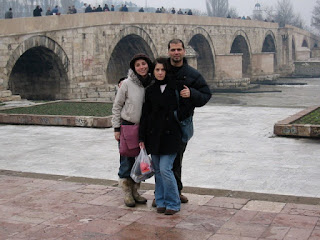 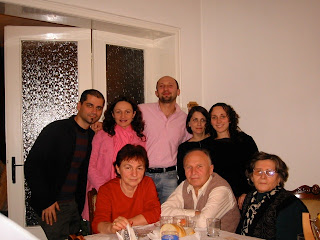 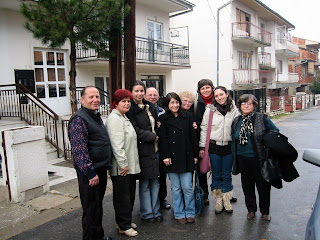 I have not been writing much, well I have been writing a lot, in Swedish, and for my University classes, and writing up drills for Roller Derby practice.  But for the blog- not so much.
I can't tell when my friends are checking in here, so sometimes I just see that there are no comments and I take a week or two off from putting anything up.  I would hate to be extremely boring.

But, in case I eaten by a goat, I will put this post up so you have a clue to my last whereabouts.
Zok and I are going to Macedonia early Tuesday morning.
We have not been there for years as you may be able to tell from the photos.
The bridge you see was built in the 1400s.
As you may know, Macedonia's high times were somewhere around the medieval era.  Mostly the country has been conquered and divided-again and again.  Actually one can view the country as quite tenacious, and marvel at their ability to keep both culture and language alive.
I want to go to this Monastery but Zok is already saying "No".
http://www.youtube.com/watch?v=3l-E-p4_2t8
The last time we were there, the country had high hopes of becoming part of the EU, but this has not happened.
I doubt I will have any access to the Internet, and frankly I will settle for power that equals hot water for bathing.

Remember if I am eaten by a goat or fall from a mountain or both; I still want the rumor to be that I was 'swept out to sea'.

You look all of 12 years-old in these photos! Just caught up on the blog (last three entries). "Extremely boring?" You? Never. xxoo.

i was going to say the same thing. you look 14 in the photos and you are never boring. ever! but the swept away at sea will always be the story if any goats are involved.