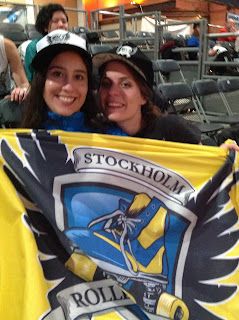 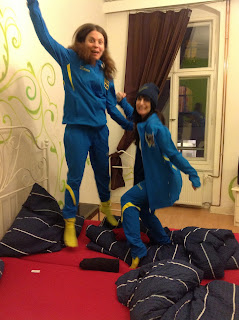 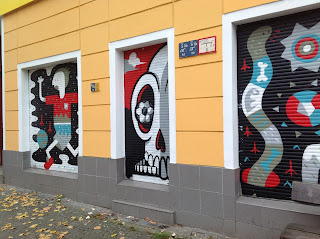 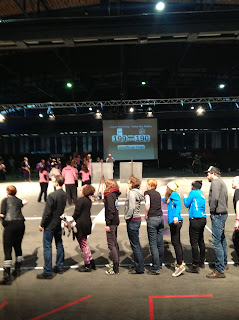 My original b-team teammates that were going with me to cheer on our A-team both got rostered onto the A-team for the three day first European WFTDA tournament in Berlin.
But two former A-team members came to my rescue.
So the three of us took charge of the cheering squad.
The last time I went to Berlin was for a roller skating bootcamp run by Swede Hurt and Suzy Hot Rod, I was so tired that I missed out on sightseeing and this time- there was just no time.
Although I did get a wider, and better look at the city which is (from a glance) much cooler than many other European cities.
Yes, yes, all cities especially in Europe have claim to history, historic events and sites, castles, majestic homes and art.  But these days they usually also have a main street (or high street) that is blotted by the repetition of chain stores, junk gifts, and fashion that is the same throughout thousands of miles.  Whereas Berlin seemed fairly free of this, there were small coffee shops and hip coffee shops, and themed coffee shops but no starbucks/waynes/tullys in sight.
Berlin is officially on my list for a short break exploration.

But on to my main topic.
Derby.
STRD ranked third of the ten WFTDA leagues that played over the three days.  A lot of derby gets decided by which team ends up in the penalty box.  And as a new and growing sport the reffing is one of the trickiest aspects of roller derby.  STRD played really exciting games to watch, the scores were close and the games came down to literally the last minutes of the game.
Most of the higher ranked derby teams I get to watch in teeny-tiny form on my computer via a connection/stream/whatever that may or may not be from a good angle or a good feed.  But to see all those skaters full size!
I do think I know a bit about derby.  But so much of derby gets disseminated into small chunks.  So there was a lot that the London Roller Girls (who outstripped all teams they played by margins of between 400 to +500 points) did on their skates that made me think "Oh Right! That is what that drill should look like!".  By this I mean Swedehurt and Mad Maloony do a great job of breaking down a skill like running on toestops to get through a small space between skaters or a skater and out of bounds-but seeing so many of the London skaters doing just that over an over made it all go 'CLICK!' in my head.
This of course does not mean my body can do it- but I have a vision of what that body is supposed to do.
I had a great time watching, learning and cheering.
There are only rare moments in my life I have felt 'a part' of something bigger than myself.  Certain concerts I helped put on- some protests or awareness/charity projects like 'Home Alive' and now Roller Derby.
My part has been small- yet one can not measure the effect that these small parts make.  Also I can clearly remember being in my car with Pip and Elissa and our dream was so small, a venue we could properly scrimmage in, and enough skaters to be able to scrimmage.
So much has happened since then, for all of us.
There are 3 bouting leagues in Tasmania now.
I got to spend almost two years (!) with a wftda league that has talent way beyond my pay grade.  I got to find out what kind of skater I could be with consistent, hard training.  I got to experience the lifestyle of my twenties self in the middle of my forties self and now know what I am not missing.  (I mean that in the nicest way).
I am currently still experiencing city life in way that when I say 'Sure, it is small a bit slow but Tasmania is a paradise'-I really mean it.
There is a B-team (that's me!) double header this Saturday.
Then I travel to see Cookie and her family in Wales for a week.
Then finally, I get a husband who will actually have some time off.
Then we go to Tasmania and it will be 2013.
How the hell did that happen?
*One last thing- the matching warm up track suits that STRD are now sporting.  I can not really explain them, but I think the experience for me was summed up by my girl Betty Bamalam who noted that most women joining roller derby wear items such as fishnets for the first time...but for me...it has been about wearing sport clothing for the first time.
Posted by Colleen at 10:12 PM